A Peek into Writing Home of the Heart 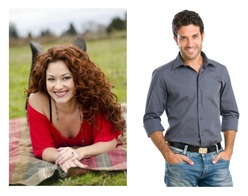 Home of the Heart was my first novel, and, oh, on what a ride it took me and my characters. Some writers work out the plot first before they begin to understand their characters.  I like to develop my characters and let them dictate the arc of the plot.

I started by clipping images of my characters (on the left here). Meg Carey has an abundance of red hair and the passion to go with it. Matt Aaberg is definitely a clean-cut, outdoor kind of guy. By the way, Aaberg is a Scandinavian surname meaning "hill (or mountain) by the river." 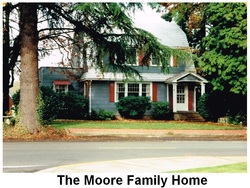 I often hear the advice, "Write what you know," and that's what I did. I'd been an interior designer in the Los Angeles area, and I had a friend who was an up-and-comer in the business. So between some of his experiences and mine, I had lots of material with which to work.  I especially liked imagining Meg's transformation of a small ballroom in a New York City mansion into a large playroom.

I used my own family as archetypes, exaggerating their real-life characteristics.  I had to warn my parents that I didn't see them exactly as I portrayed similar people in my story.  Meg's family home is somewhat of a character, too. I've described it very much like the home in which I grew up. 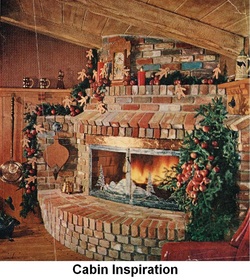 Romances usually start with a  problem between the hero and heroine. I wanted some of my characters' conflict to be geographical. Meg is wedded to her L.A. job, so I decided that Matt would be a fanatic about his television work in Portland, Oregon. I had a phone interview with Steve Amen, executive producer and host of OPB's Oregon Field Guide which explores Oregon's ecology, outdoor recreation, and natural resources. He graciously shared some of his most interesting work experiences. Why would Matt ever want to leave such a great job in such a great place?

I couldn't resist going into quite a bit of detail about food.  Matt wants to make his cross-country ski date with Meg extra special, so he enlists the help of one of his sisters, who is a caterer.  She creates a delicious trail lunch as well as a sumptuous dinner to be served in their family's cabin. I'll give you a hint: the meal ends with Chocolate Raspberry Cheesecake with Raspberry Sauce. Just thinking about it gets my taste buds going. How does the meal end for our romantic partners? You might be surprised. 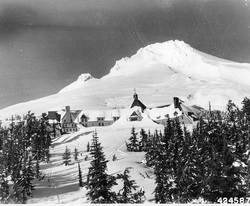 I'm a descendant of Oregon pioneers and have lived in that beautiful state much of my life. As a teenager, I learned to downhill ski on Mt. Hood, and I'm totally enamored with Timberline Lodge which is perched on Mt. Hood's shoulders. It's definitely a romantic place, and I loved giving Meg and Matt the opportunity to fall deeper in love by the lodge's giant rock fireplace. 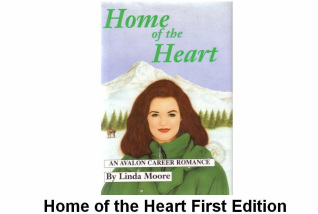 As much as I loved the original version of Home of the Heart, I wanted to do some revising before I released it as an eBook. For one thing, I'd like to think I'm a better writer than I was when I first wrote it. To my surprise, I had to change several elements to make the story current. Today, many people rely on cell phones, most every electronic device has gone digital (televisions no longer have tubes), Matt and Meg's cars had become outdated, the latest clothes designers have changed, and going through security at the airport is much more complicated.  And, of course, there was no such thing as eReaders.

Fortunately, people haven't changed all the much. Love is still one of our most perplexing and rewarding emotions, be it in our stories or in real life.  As Meg's father might say, "Ain't it grand?"

P.S. If you believe, as I do, that Home of the Heart would make a good Hallmark Christmas movie, I invite you to let them know. http://www.hallmarkchannel.com/Others/userapply/default.aspx